Alone on Mount Horeb, having fled for his life from Jezebel and her forces, the voice of the Lord comes to the prophet Elijah and asks, “Why are you here?” (1 Kings 19:9, 13).

When I was first discerning a vocation to the Conventual Franciscan friars, Bro. Tim Unser gave me part of 1 Kings 19 to read and reflect upon. At that time I was only nineteen years old - still a teenager - and charmed by the image of God coming to Elijah, not in the wind, earthquake, or fire, but in the small whispering sound. I don’t think I contemplated much on why I was there on retreat with a vocation director. Rather, I was struck that God does not always communicate in grand or obvious ways. It was a comfort to me, for though I felt called to the Franciscans and wanted to become a religious brother, there were no ostentatious signs pointing me in that direction from on high. Perhaps only a still, quiet voice. Yet the question, Why are you here? would plague my mind both consciously and subconsciously throughout my time in formation.

Cut to seven years later - the summer before I would profess solemn vows of poverty, chastity, and obedience as a Friar Minor Conventual. I was landing back in San Antonio, TX after five weeks of studying Spanish in Costa Rica. Just a few days later I was going to take yet another flight, this time for a pilgrimage to Italy. Standing in the airport terminal ladened with bags and hundreds of strangers passing by, an overwhelming thought crossed my mind: It feels like so much of my life has been an effort to get away. Away from what, I couldn’t tell you, but unlike Elijah, I at least knew I wasn’t fleeing Jezebel’s soldiers. On pilgrimage, though, that familiar query, Why are you here?, resurfaced and leaned its annoying head on my shoulder.

As friars all preparing to profess solemn vows our pilgrimage group dove into our Franciscan heritage, soaking in the sites significant to our founder and cherished by the saints of our order - Rome, Greccio, La Verna, Rivo Torto, and of course Assisi. We visited breath-taking shrines and humble chapels, and every place filled me with joy and a deeper intimacy with St. Francis and Jesus, our Lord and brother. I would be remiss, however, if I didn’t admit that perhaps the most savored part of the experience was all the delectable Italian food. But I was there for more than just sacred sites and sumptuous fare. I was searching. Though final profession was less than two months away, I was hoping that some excursion to one of St. Francis’ beloved sanctuaries would affirm that I was where I was supposed to be, that I was indeed called to be a friar, and that I would have some sense as to why.

On one such outing we were given the entire afternoon to hike about the Carceri on Mt. Subasio above Assisi. The natural grottos among the forest were favored places of hermitage for Francis and the early friars. I preferred these opportunities when we were expected to be alone for prayer and reflection, and finding a resting spot on the trail, I cracked open my Bible and ate my sack lunch. I turned to the passage Bro. Tim had given me on my discernment retreat seven years prior, the one I had already chosen to have read at my solemn profession: 1 Kings 19.

I was once again amused by the angel imploring Elijah to eat. Food had always been a significant feature of my Franciscan experience, and this pilgrimage was no exception. I also realized that not once but twice in the chapter a heavenly voice asks Elijah why he is there, and this especially resonated with me. Deep within my soul, I had been asking myself that same question throughout the pilgrimage. The prophet responds on both occasions that he fled because of persecution for his fidelity to the Lord. I wasn’t being persecuted, but I was reminded of that haunting notion that came to me at the airport between these two trips abroad. So much of my life had felt like an effort to get away. More questions ran through my mind. Had I been running from something? Dysfunctions in my family? The world? Myself? And where was I going anyway? How was I being called to minister as a friar? I wrestled with some of these questions, but I also recognized that the whole pilgrimage had seemed like a metaphor for my vocational journey. I go where I am led, not knowing what I’ll do or what I’ll find. As for that small whispering sound, like Elijah’s experience on Mt. Horeb, something akin to that was yet to come.

A few days later I ventured to the Bosco di San Francesco, a forest just beyond the wall near the Basilica of St. Francis. I had expectations. For one, and this is embarrassing to confess, but I kind of thought being a friar would allow me to enter the forest grounds free of charge - or at least with a discount. I thought the trek alone through the woods would be full of gorgeous views and fill me with profound insights about my vocation. And I assumed that the trail would be circular, ending where it began. But I was wrong on nearly all accounts. Indeed, I paid full price, and the forest and olive groves, though lovely, were admittedly not that spectacular. Nevertheless, onward I walked in the misty July humidity. Surely the trail would wind itself around. But no. It just kept going down the hill, and I kept getting farther and farther away from the city of Assisi, breathless and sweaty.

At last I came upon the ruined walls that had once surrounded a monastery and waiting at the end of the road was a little chapel - the Church of Santa Croce. I had journeyed all that way and knew I would have to trudge all the way back uphill in order to return. Though time was short, I had to go inside the chapel. It would be my only reward for all my efforts. I knelt down in the quiet nave of this tiny and nondescript church. The only bit of artwork in the sparse sanctuary was a fresco of the Blessed Mother and St. Helena gesturing to an empty cross.

I would be lying if I said I didn’t feel a little dejected. All that hiking, all that time, and I still had to do it all over again in reverse to get back. I breathed in deeply, sighed, and looked up at that cross. Of course, it would be a cross. What could be more appropriate? I didn’t have much time to pray there, as I needed to return to the pilgrimage group for vespers. If I had so much wanted an answer to all the doubts and qualms, I had about being a friar, the plain and simple cross had to be it, and there probably could be nothing better. This was not a Paul-on-the-road-to-Damascus kind of theophany, but maybe it was that small, whispering sound.

As I hiked back up the hill to Assisi, I mulled over that modest little church and fresco. It was a sobering return trip. I felt a little bit like the disillusioned, young Francis as depicted in the statue perched across from the basilica. Nothing about this excursion met my expectations. (I didn’t even get a discount.) But God seemed to be telling me to let go of my expectations - expectations for grandeur, for answers and insights, and even for life experiences to make sense. If we follow Christ, whether as religious or laity, we follow him to the cross, which is the ultimate “letting go,” the utmost self-emptying.

Upon much later reflection on Elijah, I noticed that after the theophany on Mt. Horeb the prophet slowly fades from the larger narrative of 1 & 2 Kings. Like John the Baptist, he must decrease despite his zeal for the Lord. And as I think more about that question which had plagued my mind - “Why are you here?” - and the only semblance of answer I got in that barren sanctuary at the end of a lengthy trail, I don’t think that question matters so much. Our vocations in life are not really about us, but if we follow our call to its greatest end, we will encounter the cross in some form or other, and with grace we’ll fade away and let Christ be all in all.

A Hope to Witness: Walk on Washington 2020

“I was to be able to! The Gospel impels me"

Statement From All Provincials 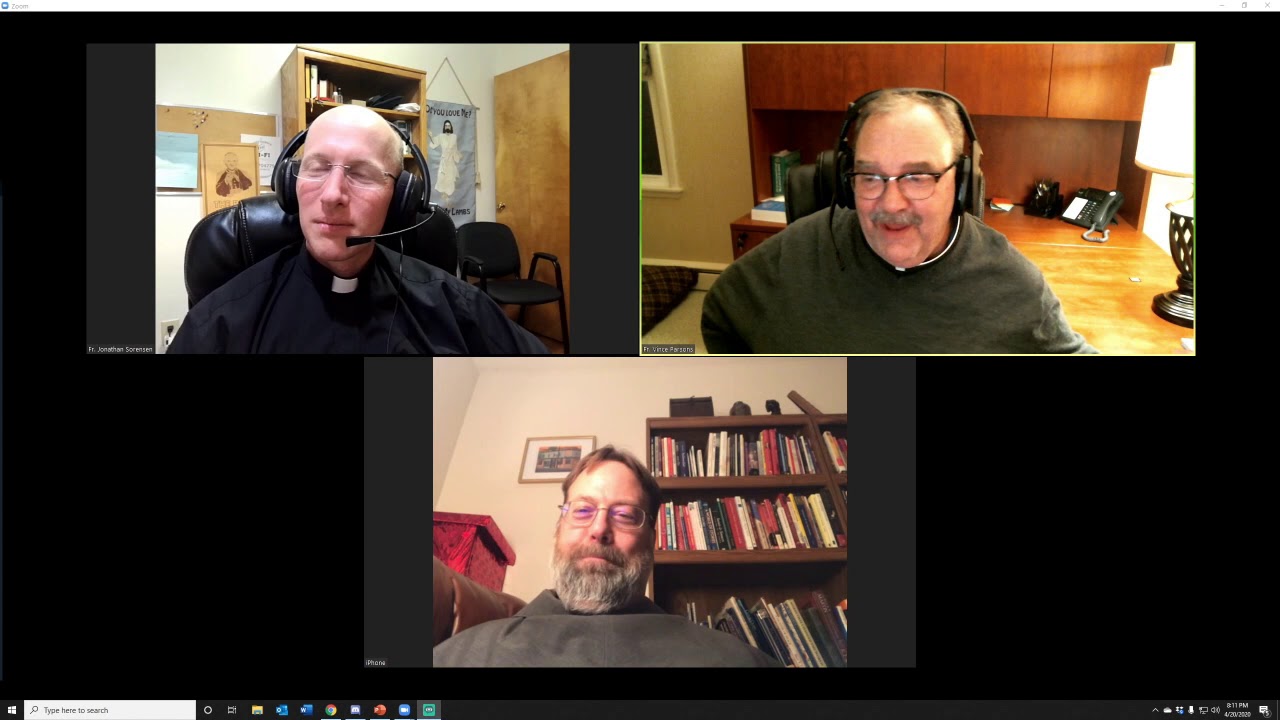 A Hope to Witness: Walk on Washington 2020

“I was to be able to! The Gospel impels me"

Vows During a Pandemic